Among the blockbuster slate of Phase 4 that has already delivered shocking Multiversal surprises and game-changing twists, Marvel Studios will soon wind things down a little for I Am Groot. The Disney+ shorts series will premiere all five of its episodes on August 10, just one week before She-Hulk: Attorney at Law.
Whether these shorts are canon to the MCU remains up for debate, but they appear to take place after Guardians of the Galaxy and before Avengers: Infinity War as Vin Diesel’s talking tree stays in his iconic Baby Groot form.
Just recently, Marvel Studios celebrated the imminent release by premiering one episode in theaters before select showings of Thor: Love and Thunder. Now, this early premiere has led to the first description of Episode 1, “Magnum Opus,” surfacing online.
I Am Groot Episode 1 Full Description 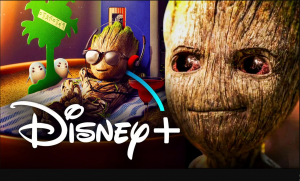 In advance of the I Am Groot shorts hitting Disney+ on August 10, Marvel Studios released the “Magnum Opus” premiere episode in select theaters before Thor: Love and Thunder. With these showings now underway, a full description of the premiere is now available, and it’s hilarious.
The classic Marvel Studios fanfare gets an update this time around with a sped-up version that gets interrupted by Baby Groot peaking into the shot to begin the short that takes place on the Benatar, the Guardians of the Galaxy’s ship. Throughout the short, Groot gathers supplies to make his own piece of artwork aboard the ship.
The first supplies include the shreds of an Alf comic book, some of Rocket Raccoon’s tail hair that Groot cuts off himself with tiny scissors, and an important-looking piece of technology torn from within the ship. His next collection is a bar of soap which the talking tree steals from a shower, whilst in use by Drax, before riding around the ship on that bar of soap
Having gathered his supplies, Groot collects everything needed to piece them together, using the comic as a canvas. The adorably tiny Guardian even used the flame from one of Star-Lord’s jetpack boots to complete his work.
With all that done, Groot chose to blow a hole in the interior of the ship, which he attempted to repair with tape. This all leads to a surprise cameo from Bradley Cooper’s Rocket Raccoon as he comes to check on the explosion.
Rocket initially appears furious at his child-like comrade, until Groot reveals his homemade art of all the Guardians together, which he promises to put on top of the fridge for all to see.
Just as Rocket realizes Groot has used his tail hair, the tree skids away on his bar of soap as the raccoon gets sucked through the hole of the ship, bringing the short to a close.
The short film appears in a live-action style with both Rocket and Groot looking just as they did before in Guardians of the Galaxy Vol. 2, but as these are CGI characters, any actual filming ought to have been minimal.
I Am Groot is So Much Fun
Going off “Magnum Opus” alone, I Am Groot looks to be a fun new addition to the MCU, but it may not be for everyone. Although those looking for real character, story, action, and significance will undoubtedly be disappointed, viewers who seek a fun adventure with Groot and a few laughs along the way will find plenty of enjoyment here.
Recently, there was a debate whether I Am Groot will ultimately prove to be canon to the MCU, with James Gunn indicating they may not be. Either way, canon will be of no significance here as the focus instead remains on telling a cheerful story during the Baby Groot years that will hopefully garner a few chuckles along the way.
Several of the Guardians do catch a reference or two in the first episode, but only Rocket sees a full on-screen appearance with dialogue – which is delivered by Bradley Cooper. Due to Rocket being the only other digital Guardian who doesn’t require filming to bring to the screen, things will probably remain this way for the duration of the series.
The series of five Disney+ shorts have been promised to include “several new and unusual characters,” so who knows what Marvel legends will appear by the time the project closes out. But fans should set their expectations on small throwaway characters, instead of waiting for Adam Warlock or any other set-up for the future of the Guardians.