Marvel’s Black Panther is once again in the spotlight, largely thanks to Black Panther: Wakanda Forever being highlighted during Marvel Studios’ San Diego Comic-Con presentation ahead of its November release. While it’s been over three years since the Wakandan king was last seen on the big screen in Avengers: Endgame, the Black Panther has made his presence felt in other media too.
The hero has made a big impact specifically in the gaming world thanks to his long-standing run in Marvel’s Avengers, being one of the highlights of an otherwise maligned gaming experience since the title debuted in 2020. T’Challa came in with the “World of Wakanda” expansion in August 2021, and the character has even come with a couple of MCU-accurate suits that fans can use as they dive into the Black Panther’s abilities.
With that expansion being fairly well-received, it has fans wondering if the Wakandan hero would ever be in line to lead a gaming title of his own, particularly with Wakanda Forever set to make its mark later this year. According to the latest rumors, that day might come even sooner than expected, and with a unique twist.
Black Panther Coming to Gaming World 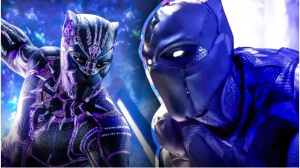 Twitter user @Nibellion revealed news about a new video game in development centered around Marvel’s Black Panther.
The game is working under the codename “Project Rainier” with a new studio featuring ex-Monolith Vice President Kevin Stephens, and it will be published by EA Games. The game itself is said to be an “open-world single-player game” in which the gamer actually gets to become the new Black Panther.
There are no other details pertaining to the story or its release date, but it’s said to be early in development.
Open-World Wakanda in New Game Experience
While the details behind this new Black Panther game are largely unknown right now, this should add yet another exciting Marvel title to gamers’ catalogs once it becomes available. It might be a different kind of open-world concept than the Spider-Man and Miles Morales games on the PS4 and PS5, but Wakanda should find itself getting similar treatment this time around.
The most interesting twist behind this title is that the player will get to assume the Black Panther mantle in their own way rather than simply playing as T’Challa, M’Baku, Shuri, or any of Marvel’s already established heroes. This should provide the opportunity for some fun personalization and a unique feel to the experience, and it will allow the game to feel that much more immersive.
Of course, with so little known about the game right now, there will likely be a fair amount of time until fans see any gameplay videos or learn more about how the actual title will work. But the fact that Black Panther seems to be getting his own game is exciting enough in its own right, especially considering how popular the franchise will be on the big screen as it ends Phase 4 of the MCU.